The Murphy Riots in Tameside 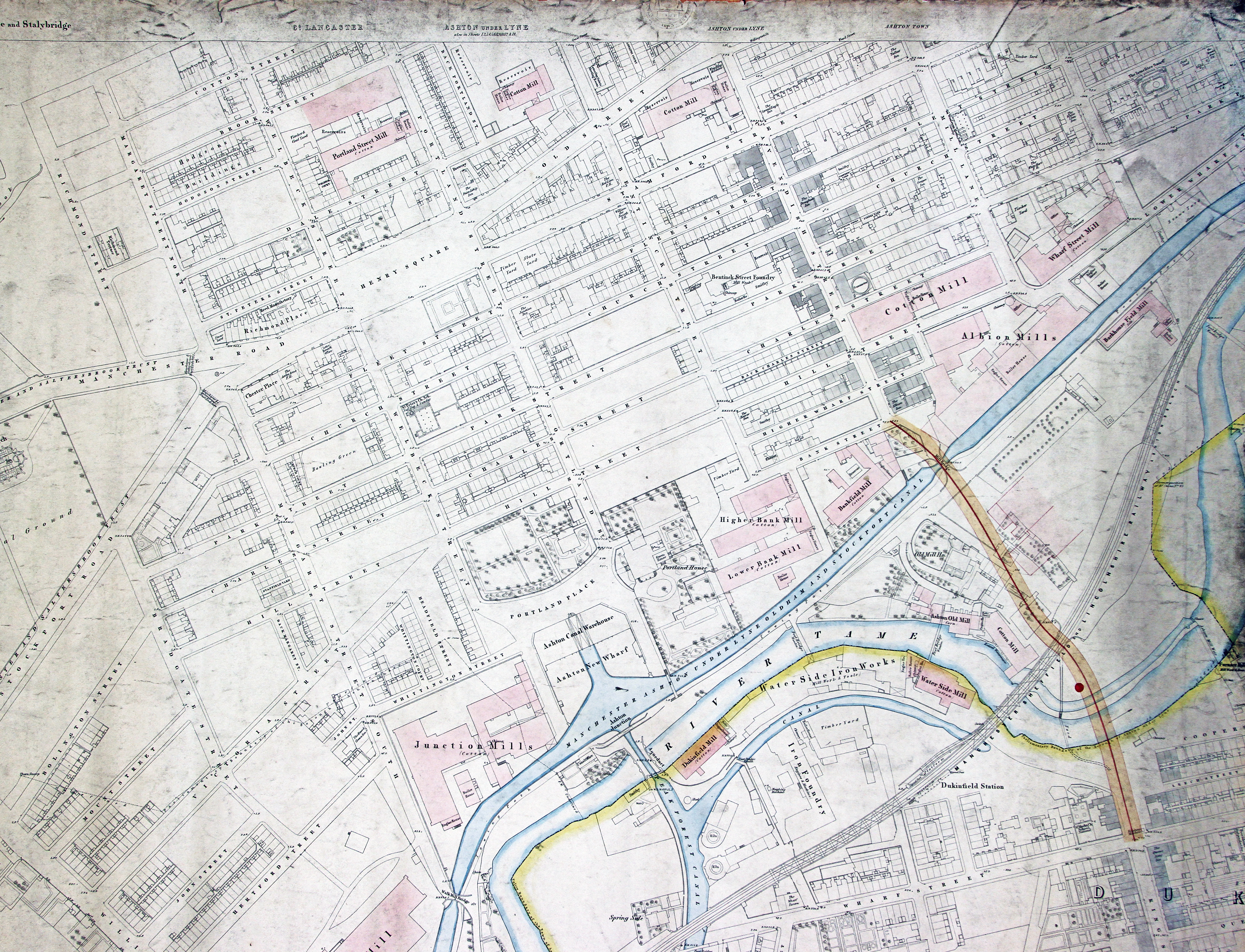 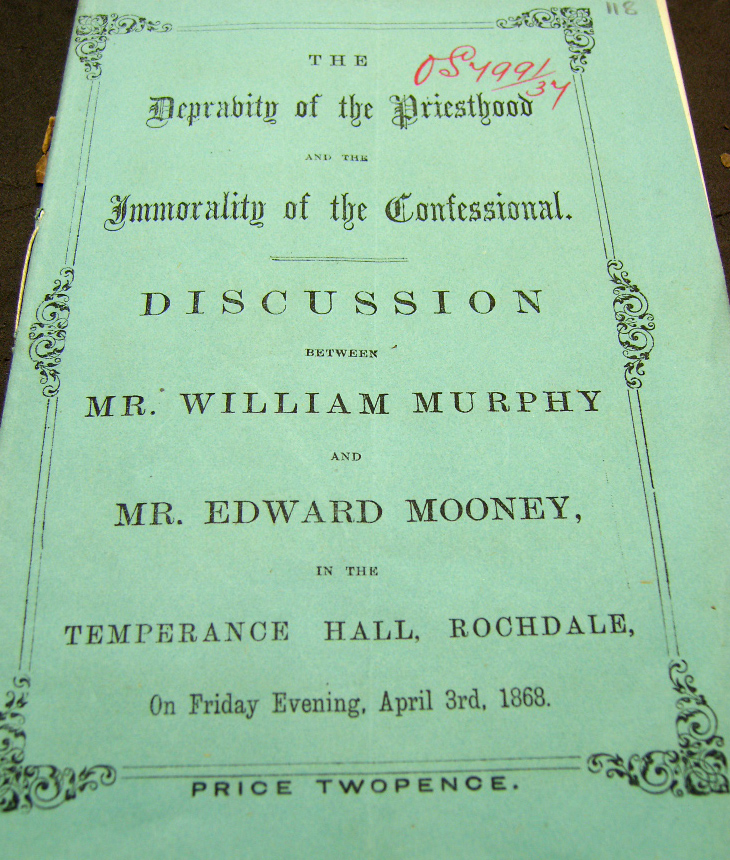 Typical Pamphlet circulated around the towns he visited First in the Series of Lectures at the Forresters Hall in Stalybridge: caused a small riot fairly easily put down: Everything he said was intended to create a disturbance. He ended the meeting with the Quote:

I have not asked the Mayor or the Magistrates to protect me, I will protect myself (whereupon he produced a beautifully finished revolver) … I am ready for being blown up and if they blow us up they blow us up to Heaven’s glory. That is me. 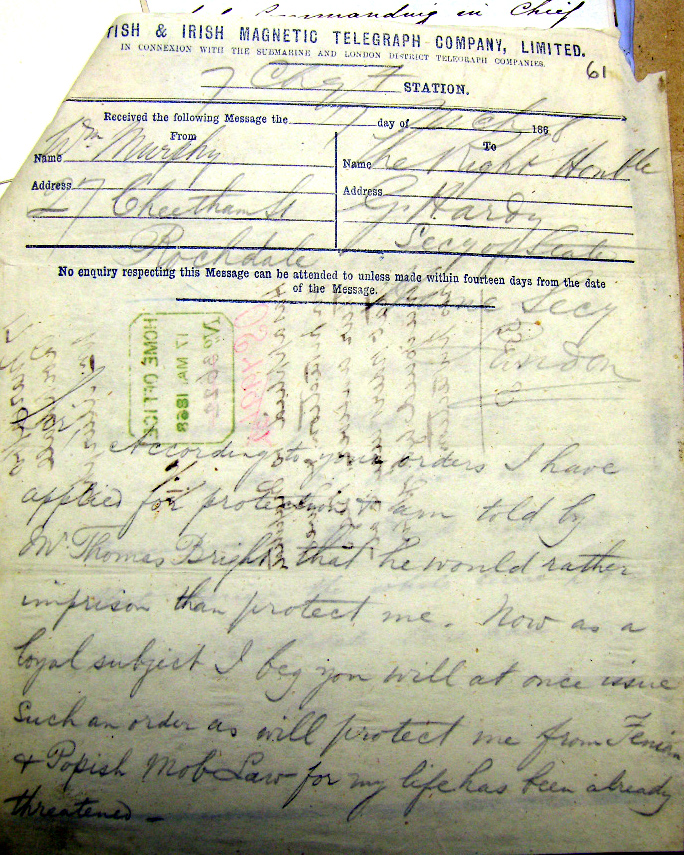 Many of the streets of Ashton held the largest populations of Irish in Tameside mainly in the West End, There were two Catholic Chapels, an Irish National Club, the Prince of Orange pub.

A particular density of Irish Families at Adelphi Court, well over 100 people of Irish descent living there at the time of the 1861 census

There was already simmering discontent:

Some of the British were still rather upset as to how the Irish had virtually displaced our indigenous population in these Irish Quarters of the town and both Protestants and Catholics existed in a very uneasy truce.

13th April had been lecturing at the Forrester Hall in Stalybridge and then moved to a series of meetings in the Old Mill in Charlestown where the fuse was lit, resulting in a riot in Stalybridge the following Wednesday.

May 9th a Demonstration took place on the steps of Ashton Town Hall decked out in Orange colours and then started to march through the town followed by eager girls also wearing the colours.

Girls were flaunting their Orange Ribbons

Throughout Sunday there were skirmishes throughout the town, but at around quarter past six they became more organised. Armed with formidable array of weapons, pokers, scythes, one or two swords, bludgeons, bayonets, pitch forks and revolvers and marched toward Hill Street (The Irish Quarter) had been thought to be impregnable,

But the formidable band marched down Cavendish Street, to Old Street and Henry Square, where they stopped for a while to steady the mob’s resolve. The Irish tried to make a stand at the Friendship Inn, but scattered quickly the Mob now grew to huge proportions of at least a thousand.

Then at about 6.30 the police formed a line across Cavendish Street but the mob broke up the ranks of police and were carried along by the impatience of the mob and with shouts the Irish stood their ground on Hill Street, the women had stones in the aprons and pelted the Mob, even excited little boys joined in. The police drew their truncheons a few heads were broken and the result that the English mob never grappled with the enemy.

The mob turned round and doubled back along Cavendish Street and Charles Street, Back Charles Street to Adelphi Court/Flag Alley. They destroyed all the houses in Adelphi court others along the back of the Friendship Inn and along Portland street. In Adelphi Court they broke in to the houses broke up the sticks of furniture and burnt it. Everything was smashed to smithereens.

At around 8.30 they got to St Ann’s Chapel and the stone throwing commenced with the Irish trying to protect their chapel. The mob grew bolder and began to smash the windows of the chapel including the priest the Reverend Crombleholme’s house. He had appeared on the roof of the chapel holding a gun which he started firing. The mob managed to break in and smashed everything and tried to set fire to it. The surging crowd then made their way to St Mary’s Chapel, but it was known to be defended by armed men. 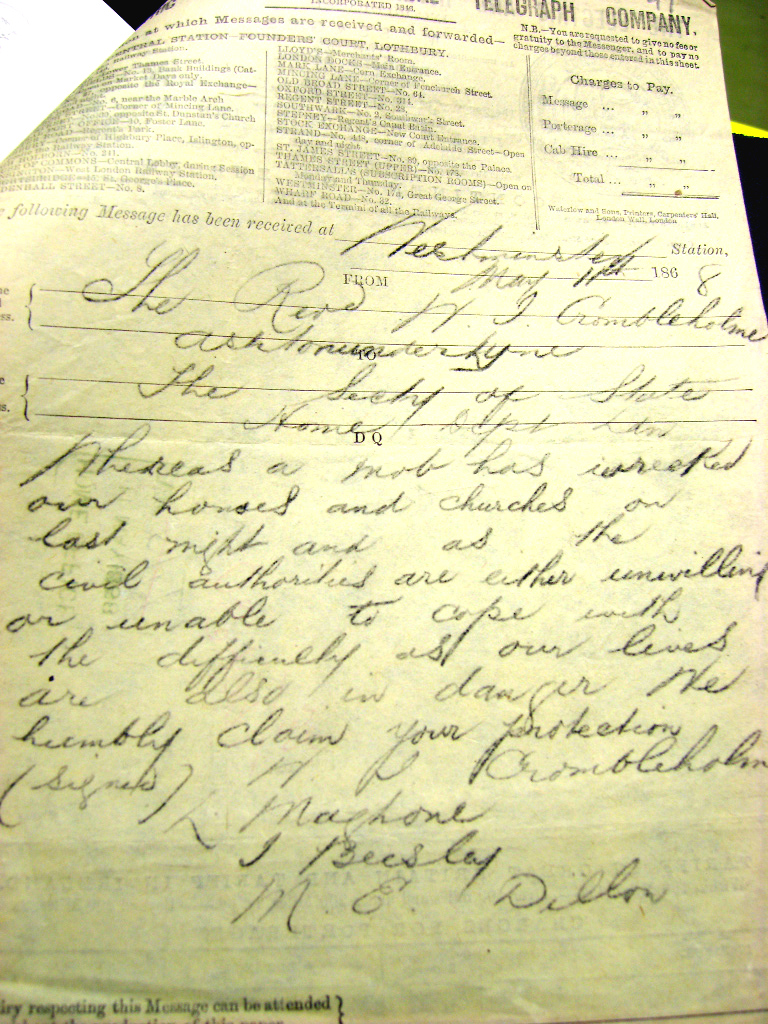 On the following Monday morning a group of about a thousand people made their way to St Mary’s Chapel again where they proceeded to destroy everything again. Here Darby Dempsey was killed and many others seriously wounded.

The night before when the riot had been at his highest the police headed by Hugh Mason appeared and when he approached the middle of the crown read out the riot act. 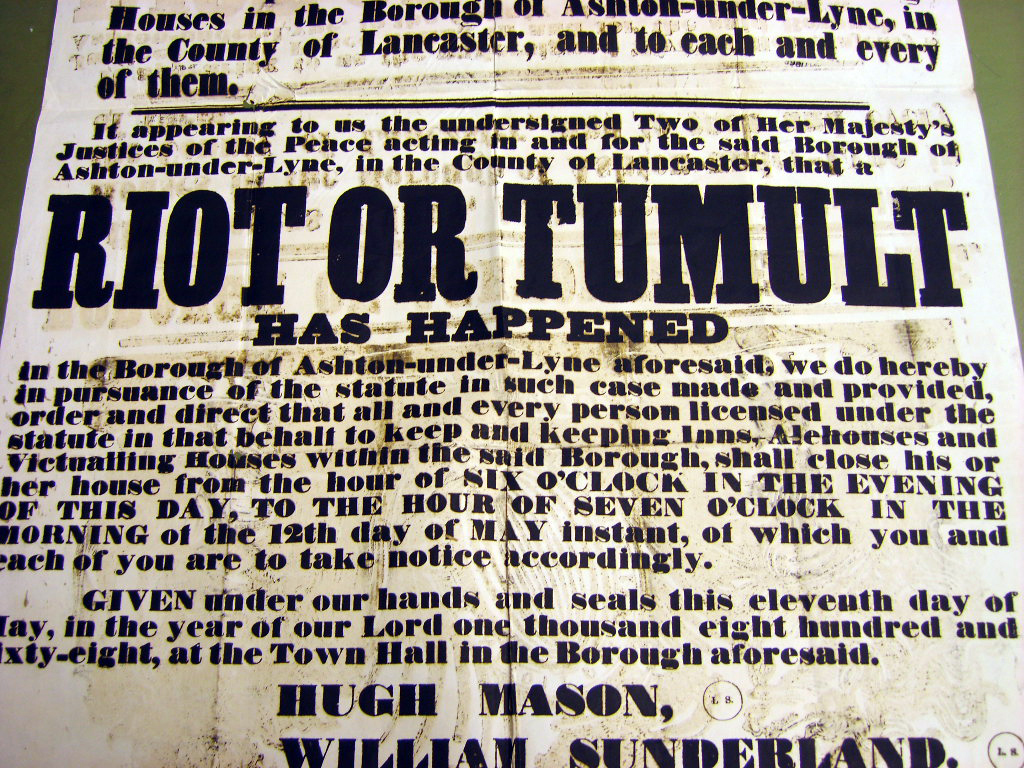 Special constables were now increased to 500 wit the aid of 100 county constables. The garrison at the barracks was kept under arms and notices of the riot act were placed around the town and beer houses and pubs were closed

The riots resumed on Monday night with worse destruction of property from 5.00pm a continuous stream of people came from Stalybridge, until Stamford Street was filled thousands upon thousands came. It seemed to bystanders that the whole of Stalybridge both men and women marching towards Ashton singing ‘Britons Never Shall Be Slaves’

This time the mob overcame the Irish on Hill Street, breaking everything up and using chair and table legs as weapons. Houses where English men lived were left untouched. Everything too small to be useful as weapons was burned. The mob then made their way back towards St Ann’s chapel which they would have attacked again but were prevented by the police. The mob numbered thousands and the police failed to disperse them then the troops were called in the 6th Enniskillen Dragoons under the command of Captain Luck and four companies of the 70th Regiment aided by 500 specials headed by several magistrates. The rioters were dispersed and made their way back to Stalybridge and the streets were cleared by 10..00pm and people went back to their quarters

Monday night the Mayor Henry T Darnton (he was an Irishman with the gift of the gab) arrived back from London. He gave a donation of £20 guineas, Hugh Mason £100 and several magistrates and gentlemen put down smaller sums for the rebuilding of the town.

Taught by experience of the last two nights the authorities were better prepared. From 4.00pm the town was split into four sections divided by 10 policemen headed by a sergeant patrolling continuously. With the army on standby under the command of Colonel Cooper as well as troops of the Enniskillen Dragons under Captain Luck, Captain Smith, the Chief Constable of Cheshire and Captain Bruce the Chief Constable of Lancashire and ordered 100 constables into Dukinfield under the charge of the Deputy Chief Constable Little and Superintendent Steen.

Faced with such a large presence the mob was deterred. People did gather on Stamford Street and Bentinck Street but tempted by nothing more than curiosity and soon dispersed quietly at the request of the police.

click for the names of the signatures of those demanding an Inqury into the events of the Riot.
click for a list of Special Constables appointed

Inquest into the death of Darcy Dempsey

Sources:
Home Office papers: OS 7991
The Account in the book ‘St Petersfield to Urban Chic’, published by the History on Your Doorstep group.
William Glover’s, ‘History of Ashton-under-Lyne’.
Manchester Times 16 May 1868 Murphy Riots at Ashton