Mary Smith, the only daughter of John Smith, was born on the 24th May 1795, at Plantation Farm in Dukinfield. Before the railway was built, Plantation Farm or ‘Dukinfield Nurseries’ as it was known was a large profitable market garden supplying the surrounding mill working towns. Mary was educated at Fairfield School and from her very early days exhibited a precocious interest in missionary work.

In 1816 Robert Moffatt, a young Scotsman came to work for her father, a good looking and charming man, who also had a burning ambition for missionary work. Later that year when Robert sailed for South Africa it was on the understanding that Mary would follow when she had overcome her parents’ objections. She finally joined Robert in South Africa in 1819. Marrying almost as soon as she arrived, she cut off her curls and tucked her hair under her bonnet determined to lead the life of a minister’s wife. Almost immediately they set off on a 700 mile journey by ox-cart beyond the Orange River to Lattakoo a mission station 600 miles north of Capetown.


Life on the mission station they built proved hard and testing – they had to grow their own food and to learn the language of the natives whom they hoped to convert to Christianity. The local Bechuana Tribe offered little help and regarded them with a mixture of suspicion and fascination. During the Boer War in the 1820s their lives were in perpetual risk from warring tribes. Gradually they learned to speak the native Sechuana language and began to gain respect from amongst the local tribesmen. Robert even translated the New Testament into Sechuana.


All in all the Moffatts spent more than 50 years at Kurinam, during which time Mary gave birth to nine children. 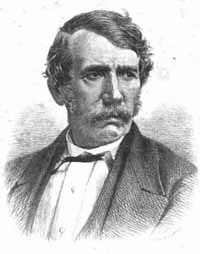 During a visit back home Robert met with a young David Livingstone, whom he persuaded to work with him in Africa. After a prolonged stay in Kurinam, David married the Moffatt’s eldest daughter Mary, much against his mother-in-law’s wish. She suspected his motives were not pure and that they were more motivated more by self-glorification.

They were married in 1845, but the years that followed were not kind to Mary. Finally she and her six children returned to England so she could recuperate as Livingstone plunged deeper into the African interior. Unfortunately, even in England Mary lived near to poverty. The hardships and separations took their toll and she died when she was just 42.

In 1870 her parents finally came home to England but, Mary could not adjust and died five months later at Brixton. Robert did renew his acquaintance with Dukinfield, but he himself died at Leigh near Tunbridge Wells in 1983.