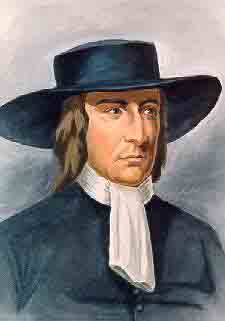 Another first in the rise of nonconformity in Dukinfield was when, in 1647, George Fox the founder of the Quaker movement, was traveling in the area he heard about a strange incident at Old Hall Chapel. On the day in question, when Samuel Eaton was preaching, there could be heard the sound of a single drummer beating a march on a drum. This had terrified the congregation and inspired George Fox to preach his first sermon: notwithstanding that most of the few words spoken on this occasion seemed to be very unflattering to Samuel Eaton. Some say that this speech by Fox took place at Hall Green at the village stocks, but this seems to have been a modern invention. It was not Fox's usual method of 'Declaring the Truth', which normally took place by his practice of invading places of worship as an unlicensed intruder. [1]

The Following is from his autobiography:

“Passing on, I went among the professors at Duckingfield [sic] and Manchester, where I stayed awhile, and declared truth among them. There were some convinced who received the Lord's teaching, by which they were confirmed and stood in the truth. But the professors were in a rage, all pleading for sin and imperfection, and could not endure to hear talk of perfection, and of a holy and sinless life. But the Lord's power was over all, though they were chained under darkness and sin, which they pleaded for, and quenched the tender thing in them.”[2]